Report Back on: Lussekatter (saffron) buns.

Yesterday, someone had mentioned Lussekatter buns in one of the groups on FB.

Having never heard the term before, I Googled as to what a Lussekatter bun was, and found that they are saffron-flavored sweet buns that are made in celebration of St. Lucia’s Day on December 13th.  The buns are often shaped like double S’s/figure 8s — which are evocative of cats/cat eyes, I suppose.  (One quick web translator defines lussekatter as ‘Lucia’s cats,’ for example)

Looking over the recipe, I was glad to realize that the recipe is rather straightforward, and I already had everything I would need on hand, except for saffron.

So, this morning, I went out to buy saffron.

And I discovered that saffron can be hard to find around this area of the country.   But I eventually was able to find some ‘Spanish saffron threads’, and I was on my way.

The bread dough for these buns is very buttery and sweet, and so, this bread smells wonderful while it is baking.

(Actually, if I was going to caution anyone about making these, I would point out that one whole package of saffron threads (little under 1/2 ounce) is exactly the amount needed…and as the reviewer on the above recipe points out, try to get saffron that is the highest quality that you can afford, if you really want the saffron flavor to come through in this recipe.  I don’t know what Europeans use, but the Spanish saffron that I found and used wasn’t as flavorful as I’d hoped.)

Here’s a picture of how mine came out:

If the pic ever does show up, you might notice that the buns are a little flatter than they should be.

It’s that damned Florida humidity is what it is.

But they taste good.

My younger son drew this some time ago.

I was talking to a friend earlier this afternoon, and I mentioned that my youngest son often draws pictures of the Norse gods.

This particular picture was a gift for me, because I had been having an awful day, and K wanted to cheer me up.

(In case you could not guess, it is a drawing of Loki (Loce) and his daughter, Hela (Hal).)

And I must say, it *did* cheer me up…especially the fact that Hela is smiling.

Who wouldn’t be cheered by Hela smiling?

On my way to the supermarket, I noticed this sign: 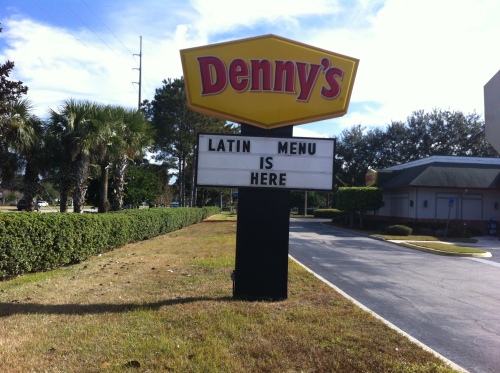 It got me to wondering.  What if this sign meant what I’d initially thought that it had meant, and Denny’s had suddenly wanted to appeal to linguist nerds?

How long do you think that it’s going to be before Denny’s puts out a menu in Classical Greek?

Or how about ancient Hebrew?

Or best yet, Proto-Indo-European?

That’s what I want to see:  a Denny’s menu in PIE.

Or, at the very least, a dessert menu.