Lately whenever I meditate or ask the Universe about my own practice/devotionals – I get visions of jellyfish.

Though I hadn’t ever looked up what jellyfish represent (as totems/spirit animals), I decided to research the symbolism of jellyfish recently.

According to the descriptions I found on several ‘what’s your spirit totem’ websites, jellyfish symbolize a need for surrender, a spiritual nudge to go with the flow and the necessity of trusting the process.

I have always had an unreasonable fear of jellyfish.

I cannot even look at a picture of a jellyfish.

I will admit that I get uncomfortable just seeing them on TV (such as how they are prominently featured in that Prevagen commercial.)

In short, Jellyfish FREAK ME THE FUCK OUT.

And yet, I should not be surprised at the irony of this situation in that a creature that I’ve always taken great pains to avoid – the jellyfish – should be one that represents the exact spiritual concepts with which I have been struggling.

I imagine that the Universe must be having a good long laugh at my expense regarding this latest development as jellyfish and the necessity of surrender have combined to create a rather intense two-for-one push out of my comfort zone, eh? 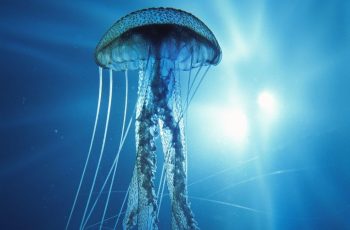 So, here’s a few interesting things I’ve learned in my research about jellyfish:

Despite being biologically and rather structurally ‘basic’ creatures, jellyfish have survived for millennia.

Their diet consists of whatever food supply (small organisms) they come across while floating in the ocean, as they have very little mobility/agency of their own compared to most sea creatures. In this sense, jellyfish are more at the mercy of the tide and currents, the wind, or whatever gets in their way as they float in the ocean than most other creatures.

Unimpeded, there’s a certain species of jellyfish that are practically immortal – the Turritopsis dohrnii – the immortal jellyfish [pictured above].  These jellyfish only die from outside influences (injury, being eaten, etc.), as this species of jellyfish can revert back to its earlier polyp form at any time. In this regard, it is easy to see why this jellyfish could symbolize infinity.

As well, most jellyfish do not seem to have many natural predators. That’s right – there aren’t many creatures that hunt them/prefer to eat them. Therefore, the jellyfish population is primarily kept in check through misadventure/outside influences. In a sense, the jellyfish is symbolic of an organism that trusts and relies on the abundance of the Universe to exist.

Coupled with that near immortal/infinite existence, jellyfish have come to symbolize vulnerability, trust, and surrender.

So I take these visions to mean that – as much as I hate jellyfish – here’s another sign of the Universe asking for my SURRENDER.

Month for Loki, Twenty-Eighth: My paths are open before me…

“You took my hand and drew me to your side, made me sit on the high seat before all men, till I became timid, unable to stir and walk my own way; doubting and debating at every step lest I should tread upon any thorn of their disfavour.

I am freed at last!

The blow has come, the drum of insult sounded, my seat is laid low in the dust.

My paths are open before me.

My wings are full of the desire of the sky.

I go to join the shooting stars of midnight, to plunge into the profound shadow.

I am like the storm-driven cloud of summer that, having cast off its crown of gold, hangs as a sword the thunderbolt upon a chain of lightning.

In desperate joy I run upon the dusty path of the despised; I draw near to your final welcome.

The child finds its mother when it leaves her womb.

When I am parted from you, thrown out from your household, I am free to see your face.

All of my life I have been wounded

And I’ve been holding myself prisoner

With my own judgments, my own shame.

So I put on many masks

To hide my wounds, to hide my shame.

Masks of strength and certainty

To hide my fear and my vulnerability

Masks of indifference and anger

To hide my grief and my pain.

To set myself free.

Reveal my lies to me.

Take my masks from me.

Show me my truest self

Teach me to be fearless

With no need to hide

So I was finally catching up on Doctor Who this past Sunday, when the 12th Doctor (Peter Capaldi) from the Christmas 2016 episode, The Return of Doctor Mysterio, has this exchange with a young boy named Grant who asks the Doctor who he is:

I hate to get all Pop-Paganism on y’all, but this particular Doctor evokes so much of  the essence of Them for me that I am continually being thrown off guard by those sorts of random side comments.  Especially when I find myself wondering what the heck They mean…because there is so much about Them, what They do and what They want that I have gotten to the point that I am beginning to wonder if it will ever make sense.

But as Madeline L’Engle wrote: 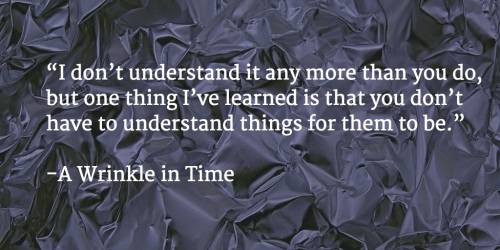 It’s kind of funny that the word “learned” is used here, since what she’s learned is that you can’t know everything.

Instead of learning as gaining knowledge, here it’s recognizing a lack of knowledge.

Month for Loki, Seventeenth: The lesson, in brief.

Today I made an offering to Loki

and received this odd little bit of synchronicity:

From Gravity Falls’ Mabel, of all places. 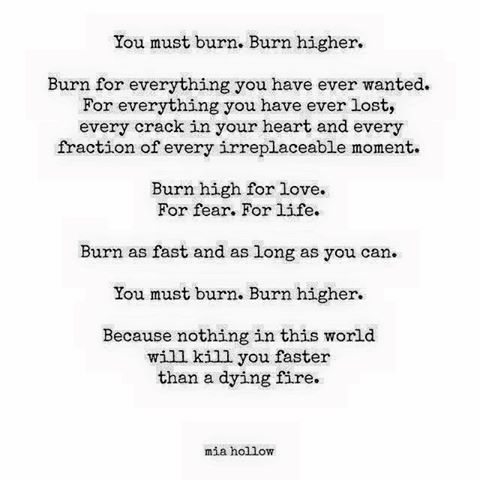 Because He is the fire

He is asking me to burn.

I haven’t done a rune-pull in a long time, but the other day, I had the surprising urge to do so.

And I pulled Uruz. 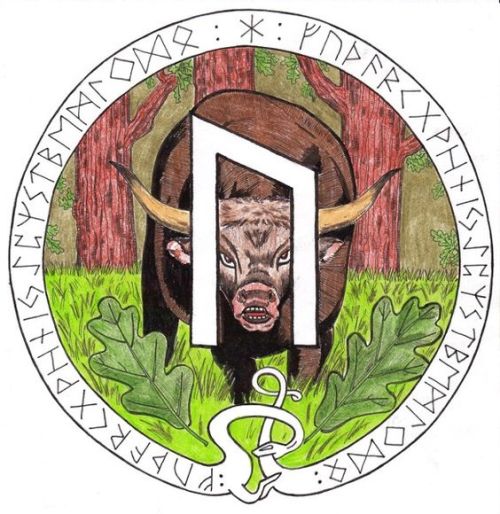 (artwork: Uruz, by Miky, from his Book of Shadows; here.)

Funny, of all the runes, I will admit that Uruz – the second rune of the first Aett of the Futhark – does not come up in my readings very often, and so I am not as familiar with its meanings as much as I am about some of the other runes.

This is odd, as I was showing my son K a bindrune that I had seen that incorporated Dagaz, Gebo and Uruz as part of its structure earlier that morning, so it was an unusual coincidence that this rune –which I had mentioned to K that I was not so familiar with – would be the next rune to come up in a rune pull.

How amazing it is when the Universe conspires to highlight a lesson.  I was just saying I wasn’t so sure of the meanings/power of Uruz…and now here it is. Perhaps I should have expected it.

My overall impressions of this rune are vague at best, as I knew that it is a rune associated with that animal, the auroch (as pictured in the artwork above), and in a reading, I often felt Uruz represented a physical obstacle or unpleasant task that must be faced in order to move forward.

Doing some research on Uruz, I found this description, and I was pleased to see that my basic impression of Uruz wasn’t so far off:

This rune signifies the power of the universe but it is a power that cannot be owned or controlled. [Uruz represents] the strength within you to fulfill your dreams, but with that strength comes responsibility.  Strength is not a force to wield over others but a force to stop others from exerting power over you.  Use your strength to keep focused on your present path and stop yourself from being outmaneuvered.

[Other aspects of Uruz] include emotional and spiritual strength, male sexual potency, and good health.

Another interpretation I got when reading the translation from the above mentioned website that featured the artwork:

Uruz is a physical manifestation of a challenge which leads to a major life change. Much depends upon the strategy you choose when you approach this challenge or task, as you may be required to overcome yourself in rising to the challenge or task.

Uruz represents personal success, so be ready to accept the process and…step into personal power.

Uruz is also known as a rune of healing and health, so if you need that vitality,  Uruz is the rune.

I believe in pandoramancy, mark 2.

So.
Something worrisome is happening…

but there is nothing much I can do at 9:18PM EST

…but if you know me, you know that I’m worrying anyway.
And then, my son surprises me with this inspired piece of pandoramancy.
And that’s how I knew that this had to be today’s Song of the Day:

I laughed – because I love this video – but then I burst into tears.

I don’t know how he could have known.

And yet the message – that everything is going to be OK – is something that I didn’t expect to hear, and yet it is a message is one that I needed to hear so badly right at the moment….

Sometimes the worry overwhelms me.

But the Universe seems to want me to know