So much for being Polyamorous.

Remember way back in the year when I wrote my thoughts here about polyamory and communication?  About how the three rules of polyamory are:

Well, I just got off the phone with my husband’s girlfriend of 7 months, and she tells me that my husband of 20 years is in love with her and she with him.  And that he has told her that he can’t imagine life without her, and various other surprising revelations about his feelings for her, and the fabric of their relationship.

It has come to my attention that he has been not just downplaying, but outright lying to both of us about being honest with each of us

He has told her that he informed me recently (as of a month ago) that he’s in love with her, and that I am aware of the depth of his feelings for her.  She informs me that she thought that I knew that she has been staying at his D.C apartment on weekends, and that he takes her to lunch every weekday, and dinner three times a week.  She informed me that he gave her a key to his apartment a month ago so that she can come and go as she pleases, and he insisted to her that I was aware of this.   He gives her money, buys her groceries, clothing, and pays for her prescriptions and pays some of her bills. He insists to her that I am aware of all of that, too.

Surprising revelations because my husband has always downplayed his feelings for her when communicating about their relationship with me.

He has insisted on multiple occasions that their relationship won’t last forever, that they fight too much, and he could walk away at any time.

He tells me that they only see each other a few times a week, if that, and that he has ‘never paid for anything significant’ for her.

He told me last week that their relationship is not nearly serious enough (and never will be, IHO) to give her a key to his apartment, but if it ever goes that far, he insists that he would tell me.

He lost his wedding ring two weeks ago.

She apologized, saying that he lost it while over her house. She has looked everywhere, but cannot find it.

He hasn’t informed me yet.

My husband lost his wedding ring, and he hasn’t told me.

He has been so antsy and dodging and has avoided talking to me at any great length for about a week and a half now.

She called me up tonight because he has been avoiding her, since they had an argument this past Friday night.

She said that she’d started to suspect that he hadn’t told me anything, because she’s been noticing him ignoring phone calls from me when they are together, and overheard him lie to me several times while on the phone with me (the lie being that he’d insist that he was working late and was too busy to talk, and yet, he was out with her, eating dinner, or sitting in her apartment.)

When she confronted him, he became upset, and insisted that he’d been nothing but honest with the both of us, and yet she’d witnessed him lying to me several times, as well as he consistently kept dodging her questions about why he felt the need to lie if he had REALLY told me everything.

So what was he lying to her about if he’d so readily lie to me? — was her concern.

She wanted to call me — with a ‘if you won’t tell her, I will tell her’ sort of threat — and he begged her, with tears in his eyes, not to do so.

So she told him to fuck off, that she hadn’t any time for that sort of dishonesty if he refused to tell the truth to her, or to me.

So she called me to find out what he had told me, and what did I know about the situation?

Did I know about the extent of his feelings?

Did I know that they were in love?

Did I know about the key to his apartment?

Did I know that not a day goes by wherein they do not see each other at least some portion of the day?

Did I know that he had planned to fly her and her daughter down to FL for the holidays for two weeks in November (Thanksgiving) and two weeks in December (Christmas), and intended to put them up in a hotel, all expenses paid?

Did I know that he’d lost his wedding ring?

But I know that he’s been doing a lot of gaslighting…and a lot of projecting on me.

He has claimed that my anxiety about the instability of our marriage is unfounded.   He has accused me of being crazy, of being distrustful, of being angry, of mistreating him, of having no respect for him, or for our marriage.

Instead, I feel sick.

I feel like such a fool.  An ignorant, ridiculous fool.

The emergency clinic that I was referred to last night is

This is not. And yet this is.

I just finished watching the final episode of Broadchurch.

I cried practically throughout the whole episode.  It was intense.

Yesterday afternoon, I came upon two wrecked cars on the side of the road while I was walking home from the store. It was raining, and difficult to see.  I’m certain that this is what caused the accident.

One of the cars looked as if its whole front end had been ripped off, while the other just looked crumpled, as if these were cheap child’s toys, rather than full-size cars.   Both were resting upright in the drainage ditch, wrapped in yellow police tape.

As I got closer, I realized that one of them was a Chevrolet of a particular dark blue.   My heart instantly froze in my chest, as I suddenly thought of my oldest son’s car.

But then I realized that it was not.

My heart thankfully resumed somewhat after, though it still occurred to me that this car wreck had still, likely injured someone rather badly.   That observation alone cast a gloom over the rest of my thoughts on the way home.

Letting sights like that get to me feels like weakness lately, and it has been work to push them aside.

And then, this morning, another accident occurred up the road.  There was another car upended in another drainage ditch, and there were more sirens.

This time, there was broken glass, and blood still in the grass.  I pray that the driver will be OK.  I always do.

I have always tried to let these sights pass through me.  I try not to let them shake me up.

But, lately, they do.

I tell myself that I must work harder at not letting such things affect me so.

I have been crying too much over such things.

Another thing to keep my hands — and mind — busy.

I might have said this at my other blog, but I don’t know if I’ve said it here:

My youngest kid has, too.

It’s very relaxing – and the both of us have spent some quality time bonding this way.   We watch TV – usually old episodes of Adventure Time, or Supernatural – and help each other with our crocheting projects.

Though I’ve known it for years, it fills me with joy to see my kid realizing the sense of accomplishment that comes when one has created something with one’s own hands.

We are working on a scarf, I suppose, since we are just beginners: 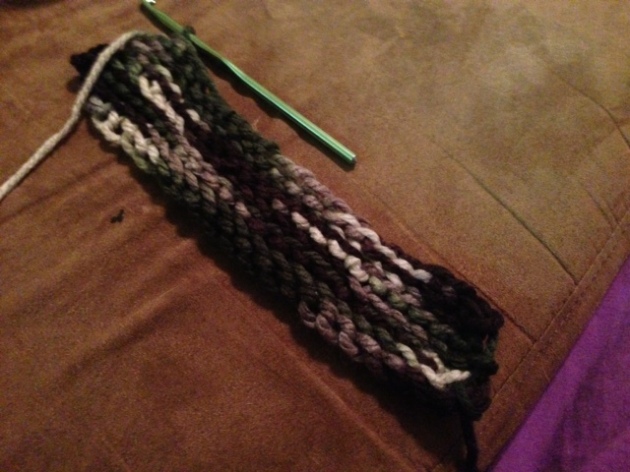 Yes, I know that we live in a mainly tropical climate – and scarves will hardly ever be as necessary as we would hope — but it’s been gratifying to work on a Thing together, my kid and I.

I like the earth tones especially — the greens, browns, and greys of this yarn that we’re using — but I didn’t read the suggested directions that one should plan to buy two skeins of it to make this scarf as described.

(Hell, I think that I might buy a bit more than two more skeins — and learn to make a matching hat to go with this scarf.)

Meanwhile, we will practice on keeping our work straight but loose right now, as we get in touch with LSP’s feelings, and follow Sam and Dean through their second season of adventures.

Sometimes, things are totally what they seem.

My husband, V and I went to the local outlets today.

While there, V bought some cologne — Bvlgarie Soir.

While shopping, however, we discovered how incredibly, almost absurdly *direct* the marketing seems to be for men’s cologne.

And we found out that it seems that things are what you might think: