As usual, I have not written in a bit, beyond the sharing of clever memes and posts of other people’s (excellent) poetry.

So for those interested, here’s an update on what’s been going on with me lately:

— This past week, I’ve been fighting a rather nasty sinus cold with more than enough congestion to leave my sinuses feeling as raw and the rest of my body as exhausted as if I have just been rescued from a week-long bout of drowning.

Though speaking of drowning, I found it more than ironic to notice that this blog has had a surprisingly high amount of hits to two particular posts that reference my feelings of metaphorically flailing and drowning in regards to my spirituality, as well.

Though I was getting tired of being notified daily about the repetitive hits to that one post about Lydia (from a tight cluster of specific locations in the U.S) so, in case anybody wonders why, yeah, I did mark that particular post as private for now.(1)

— As well, you may have heard about Hurricane Dorian – which it is/was speculated to hit Florida sometime this Labor Day weekend.

Hurricane Dorian is the first storm of the season, and not surprisingly, the meteorologists around here in Florida have been whipping everyone into a frenzy since Wednesday about the possibility that it might make landfall as a Category 4 – which would be one hell of a destructive storm.

The local news showed Dorian’s trajectory to encompass most of the Floridian peninsula. The weather maps showed that even Central Florida would be hit hard: 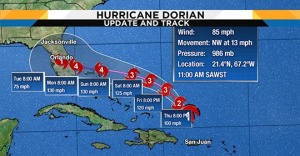 So my family and I – along with everyone else in Florida – have been ‘battening down the hatches’ as it were, boarding up windows and doors, collecting supplies (bottled water, canned goods, matches, candles, propane, batteries) and filling up with fuel for our generators/vehicles, making sandbags, and putting any and everything we value into storage/safety/out of harm’s way.

As of Friday morning, the Florida governor officially called for the evacuation of coastal areas, and most local shelters were opened to accept evacuating people and pets.

People were already settling into the shelters on Friday night.

Supermarkets reported that they’d run out of bottled water and gas stations were closing due to being out of fuel.

However, this morning – Saturday – I woke up to the local news,

reporting that it looks that perhaps Hurricane Dorian would not be hitting Florida at all.

So guess who’s freaking out and calling for evacuations now?

So I don’t know anymore.

Either way, the storm that is Dorian is hitting the Bahamas now.

But no one knows for certain.

So: Are we dodging the bullet of a devastating storm….or are all these meteorologists just crying wolf?

Who the fsck knows?

I predict that whatever happens, the next storm to come to Florida is gonna take us all completely by surprise because I can tell you that all this manufactured panic that has been created by the local news has got everyone around here feeling really exhausted and more than a bit skeptical.

So I guess we just wait and see.

(1) And to that one person that is so obsessed with that ‘Lydia’ post enough to hit that blog post several times in a single day – what gives? If you are who I think you are (based upon your IP) stop reading into what you think I am saying in that post – because you are wrong. Better yet, you might want to stop reading my blog altogether. Thanks.