A lovely poem about Loki by Sophie Oberlander:

“I never sought You.
Those places deep within my heart were far too burned and scarred
To let You in, hard like misshapen stone.
Or so I thought. But I gave much
The first time I hung on that Tree.
Not enough, by far, but just enough to shatter that wall of stone
The barest fragment breaking free.
I heard Your whisper, but turned aside my face
You could not be speaking to me.
I felt Your gentle touch cradling my wounded spirit
As You cradled Odin,
His body bloodied, His spirit on fire beneath that Tree
Long before I climbed its branches.
Was it through Your laughter that You taught me to love You?
Or through the tenderness of Your caress?
I have seen a face of You that few bother to see.
I have felt Your burning passion, gentle and tender beneath the Tree.
Brother, Lover, Friend,
No image of God quite prepared me for You.
You eased away my terror with Your wicked cavorting,
Making a broken child laugh by playing the fool.
I have seen Sigyn’s quiet contentment,
And the love behind Your games.
I no longer understand the trepidation in which others call Your name.
I have seen Your other face too,
When You took me to Your daughter’s realm.
I have seen You, locked in ecstasy,
Summoning up Her wards and wights for me.
My heart’s stone did not so much break
As melt beneath Your flame.
I have tasted Your rage, Your fury at my hurt,
Reveled in the darkest glee
With which You opened the gates of Niflheim to defend me.
No one told me how much You cherish Your children.
I have seen You, Trickster, weeping in anguish
Every one of Your children’s’ wounds piercing Your heart.
And I have seen You in battle, Odin’s equal,
Though Yours a far darker art.
I have heard Your song,
Far sweeter than I ever knew it could be,
As You took my hand, and led me from that Tree.
If it Your stories I cherish most, as we walk Bifrost bridge,
Dancing patterns amongst the stars.
You placed my hands upon the web, and taught me songs to weave.
As I hung for Asgard, through You, for Hella’s realm I reached.
I know how You are feared, or mocked, or thought long bound.
But I know too, it was Your hand guiding me
Through my darkest despair and pain.
And how can I fear Your deepest love,
When it is the freedom of my heart I’ve gained?
Loki, now it is Your burning that I seek.
Let us mingle songs beneath the Tree,
For I adore the flame you have ignited in me.”

In the form of a mare, Loki gave birth to Sleipnir, as attested in the Hyndluljóð, a portion of theVöluspá in the Poetic Edda. This story is also mentioned in the Gylfaginning of the Prose Edda

After leaving Aegir’s hall in the Lokasenna, in the Poetic Edda, Loki takes the form of a salmon to escape capture from the Gods who seek to punish Him

In the Skáldskaparmál, as Loki has cut off the hair of Sif, and under threat of injury from an angry Thor, He visits two dwarves of Svartelheim who create three gifts – a wig of golden hair for Sif, the spear Gungnir, and the ship Skíðblaðnir. Loki then goes to another pair of dwarves and bets them His head that they can’t make three things as fine as the three treasures created by that first pair. While the dwarves are working, Loki takes the form of a biting fly in order to sabotage their work – which produces Thor’s hammer Mjölnir, the golden boar Gullinbursti, and the ring-giver Draupnir.

As well, Loki takes the form of a biting flea as told in the skaldic poem Húsdrápa, in the Prose Edda. Loki takes on this form to gain access to Freyja’s bed-chamber so that He may steal Freyja’s necklace, the Brísingamen. As well this same story is referenced in the Sörla þáttr, a short story from the Flateyjarbók, a 14th-century Icelandic manuscript.

As described in the Húsdrápa, when Freyja awakens to find Her necklace, the Brísingamen, missing, she asks Heimdallr to help her search for it. Eventually, they realize that Loki has taken it and has transformed himself into a seal. Heimdallr turns into a seal as well and fights Loki. After a lengthy battle, Heimdallr wins and returns Brísingamen to Freyja.

In the Þrymskviða (Lay of Thrym) of the Poetic Edda, a Jotun king, Thrym steals Thor’s hammer, Mjölnir. Freyja lends Loki Her falcon cloak to search for it.

One of Loki’s kennings is Gammleið. This Old Norse phrase is commonly translated as “vulture’s path” associating Loki with Lopt (‘Air’) in the ÞÓRSDRÁPA, Stanza 2, verses 1-4, of the Codex Regius

The only academic source I have come across connecting Loki with spiders refers to a treatise written by Swedish folklorist Anna Birgitta Rooth in 1961, titled Loki in Scandinavian Mythology. Her treatise attempts to connect Loki within the context of Scandinavian folklore as a trickster figure, much like Anansi the Spider in African and African American folklore. Since the basis of her connections of Loki with spiders seems to rest mostly upon her speculations regarding the etymology of the word locke (a Swedish dialect word for“spider”), Rooth’s book on Loki has been met with more criticism than acceptance from other scholars. While Rooth’s conclusions are often referenced, I know of very few scholars who would agree with her conclusions.

Though from the standpoint of personal gnosis, I’ve found many Lokeans do associate Loki with spiders anyway, casting Loki in a metaphorical spider role – as a weaver of wyrd, a tier of knots, and maker of nets.

(On a related note, I recall that it been theorized somewhere that Sleipnir’s eight legs could be either a reference to spiders or symbolic of four pall-bearers at a funeral – but I cannot recall the source on that connection.)

This is a complex one. Many may associate Loki with snakes, due to His association with one of His offspring with the giantess Angrboða, Jörmungandr. But snakes as a symbol of Loki could also be due to the association of snakes as symbols of intuitive wisdom, transformation, fertility and balance of energy as seen across several cultures. In Native American lore, snakes represent several forms of duality – the duality of gender (male and female), lunar and solar, and as well as creatures associated with the elements of fire and water. As a shapeshifting form in Celtic mythologies, snakes are regarded as creatures capable of cunning transformation, as they shed their skins. As well, it was believed by the Celts that snakes lived and moved within the shadow realms (underground) for half the year, and therefore, when emerging with the sun, snakes were considered creatures who possessed hidden knowledge of the Earth and its rhythms. As symbols in Hinduism, snakes are considered wise healers, possessing a balance of energies – dark and light.

In that regard of the larger picture of snakes as symbols, I can definitely see how Loki could be associated with snakes. Therefore, it is perhaps no wonder that the Urnes snakes seem to have become one of the most popular symbols that many Lokeans have come to associate with Loki in the past ten years. 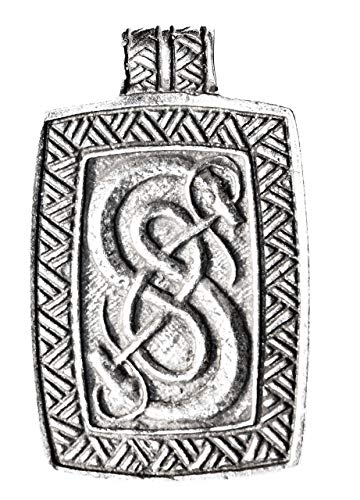 As it is with Jormungandr, Loki as a wolf may simply be another association with another of His offspring with Angrboða, Fenrir. Many Lokeans claim UPG where Loki comes across as very much like a wolf – whether in actual guise or in manner/personality – whenever Loki is being sociable, loyal, protective or even aggressive at times.

Personally, I can see the correlation to wolves in terms of Loki’s seemingly insatiable appetites, but also in His attitudes towards whom He regards as His – whether they be family, friend or foe.

These associations are likely due to Loki’s role as a Trickster Deity, as these creatures are all forms associated with Tricksters throughout many cultures.

And in an interesting bit of Icelandic folk belief that I came across recently connects quite well with my previous entry:

From a mutual FB group member, Hrafnsunna Ross – a self-described person of Croation and Scottish descent who was raised in Iceland – has this to say about Loki’s appearance and His association with foxes:

“In Iceland, Loki is depicted with light to dark brown hair. It makes sense for Loki to have brownish-grey hair because He is associated with Bragðarefur (‘Trick Fox’)…. as most foxes in Iceland are either dark grey/brown all year….(or a) lightish colored that turns white by winter.”

I’ve known a few Lokeans who associate the axolotl lizard with Loki presumably due to the fact that these amphibians exist at maturity in an in-between stage of metamorphosis called neoteny – a state of liminality.

Axolotls retain their larval gills into adulthood and this retention allows axolotls to remain aquatic for the duration of their lives.

Another name for axolotl is Mexican salamander.

“The shaman is a magician in both senses of the term: one who can operate through tricks and deceit and one who can change consciousness at will. The shaman is a sorcerer but one who relates magical ability to the communal welfare as the primary objective. The shaman stocks-in-trade are the ability to fly and to become invisible. Sometimes the specialist is proficient in bi-location, the ability to appear in more than one place simultaneously. Other shamanic ‘virtues’ include a developed aptitude for heightened vigilance as well as the cultivation of multiple perspectives. But whereas sometimes these attributes are intended to be literal accomplishments, the line between the metaphorical and the actual is rarely clearly drawn.”

So the other day, my younger son introduced me to a podcast called ‘Lore’ by Aaron Mahnke and I have to say that I’ve become a little addicted to it.

I am almost ashamed to admit that I have listened to a good 20 or so episodes – in a row – over the last two days.

While I’ve gotten a lot of almost mindless tasks done – folding laundry, sweeping the floor, even making dinner – I was surprised to stop and focus on this one.

It is called Doing Tricks.

And as you might imagine, it discusses Tricksters, shapeshifters in folklore…and of course, it references Loki, Hermes, and Anansi – and the fascinating Nein Rouge – the Little Red Man/Red Dwarf…and some fascinating connections involving the folklore of Detroit, Michigan.

P.S – Folks from Detroit/North Michigan may find the main story quite familiar.