I had a post all prepared for today concerning how I’ve begun doing a particular daily devotional activity, but instead, I got derailed by this article that accompanies this photo: 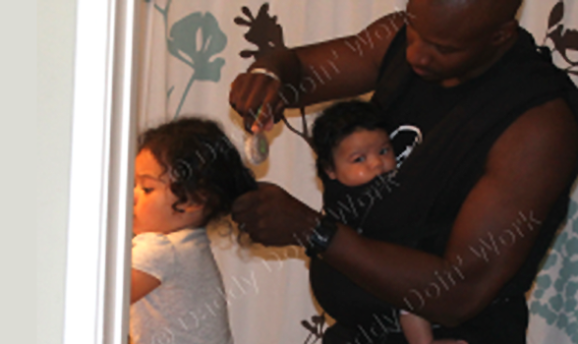 Well, this photo got me to thinking.

The father featured in this photo hopes for a day when a father just doing his daughter’s hair doesn’t come off as a big deal.

This father hopes for a day when any father doing this would not be considered unusual or even worthy of commentary.

Evidently some think that this photo should garner surprise or alarm or go as viral as this photo did on the Internet.

It’s a nice photo.  It evokes a lot of thoughts for me, but maybe they are not what you might think.

What does it make me think of?

The fact that I never learned how to do my own hair very well, and that had always made me feel like I was somehow less of a girl.

Sure, I had a mother and a sister, and a few close female friends, but no, no one ever really showed me how to do my own hair.

Some of them – the female friends in high school – would offer to do my hair for me, or, sometimes, rarely, let me watch them do theirs.

But, truthfully, the whole concept of hands-on skills of how to do braids or make evenly distributed pigtails or putting my hair up in a loose French twist with just a pencil (a trick that still delights and fascinates me, to this day) always eluded me.  Nobody really taught me the process of doing anything like that.

I’ve had three states of hairdo up to young adulthood: ‘long hair down’, ‘long hair in one loose ponytail with rubber band’, and ‘hair cut so short that I can’t do a ponytail.’

And then, when I was about 25 or so, I had a friend named Steve.

Steve took the time to show me how to braid my hair three different ways.  He also showed me the basics of pigtails, and how to take a ponytail and turn it into a bun and/or a twist.

He even knew how to make that loose French twist with a pencil trick that I love so much (but, I still never get much practice doing.)

And no, Steve was not a hairdresser.

He was just the father of one little girl, whom I imagine, always got to school with her hair done really nicely.

So, I look at this picture, and think about how grateful I am to a father of a particular little girl (who probably isn’t so little anymore), and it just makes me happy.

That picture makes me happy…and grateful that somebody’s dad taught me how to do my hair.

I thank you and I love you for all that you have done, and all that you continue to do – for me, and for my family.