There is so much that I often think that I might want to write about, but then again, things have been so strange, sometimes I think that it would be best to keep certain aspects of what has been happening to myself.

So, in its place, things such as this happen, and it makes a good filler for something else:

The white candle on my Loki altar had a thick clump in its wick this morning.

It was shaped like the Elder Futhark rune,  Algiz  (a Y intersected by a third stave): 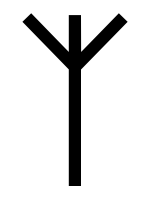 ….or perhaps a figure with its arms raised upright.
When I lit the candle,  the wick flamed up very high, and the the three prongs of the wick were striated with a swirling orange glow, as the flame sputtered and danced about.

As I watched it burn, I meditated on the various interpretations of Algiz  (or Elhaz)

-Connection with higher self, or connection to gods; an awakening.

– Can be used to channel energies appropriately, or to protect or to hold a position that has been won or earned.

Then I blew out the candle, and the wick slowly shrank and curled downward a bit, as if the wick was a figure with arms lowered

…or perhaps, a person holding arms outward, as if to embrace another.

Or…maybe I am just overthinking, hmmm?