I’ve been meaning to post about several things, the most of which is a very long post that contains a lot of musing about community, polyamory — and of course, Loki.

But as much as I have been wanting to finish it up, I have been down with a seemingly unshakable cold that is kicking my ass, and thus, I’m having trouble generating the level of coherence that I need in order to complete that task.

(So I’d like to apologize to anyone who has been waiting for that promised post.  I hope to get it done soon.)

Meanwhile, I’m focusing on completing several embroidery and beading projects, as I find them rather soothing activities, since I haven’t had much energy to be vertical much these past few days.

As a result, I finished two devotional necklaces that I’d been working on, since I’ve finally received those green kyanite beads that I ordered for them, and I started embroidering the other three borders for that altar cloth.

Here is one of the necklaces: 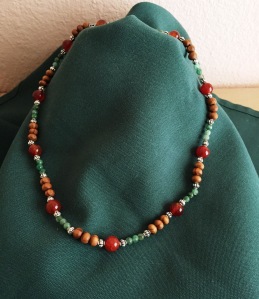 And here are the roses that were sent to cheer me up.