My devotional practice has been going through some changes, and as much as I wanted to share my thoughts about some of the work that I’ve been doing, it just hasn’t happened.  I’ve been wanting to write about the connections that I have been making – but somehow coordinating my thoughts into succinct blog posts hasn’t been going so well.

Somehow I haven’t been able to Post All the Things.

But I did want to post about how delighted I was to receive my copy of Silence Maestas handmade Loki devotional: 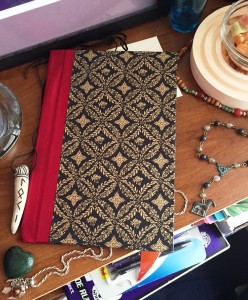 So I moved some things around on my altar – because He seemed to want it up there as soon as I opened it.

But it’s a strange sort of thing because when I was reading it, the vibe that I was getting from Him seemed to be both excited and irritated that I was reading it.  Perhaps He was cranky over the fact that I had to remove the book from its place on the altar there in order to read it?  I don’t know.

I bought a copy because I was excited to support Silence’s book project overall, but I was also curious and excited to read more information concerning the feminine Loki as well.

So my purchasing this book was intended as a gift for both of Us, in this sort of roundabout way: it was certainly intended as a gift for Him, and a combination gift/informational research project for me.  (I’ll admit that those two aspects often become somewhat entwined whenever I purchase books pertaining to Him, but, then again, not every Loki-book ends up on the altar… so there you have it.) 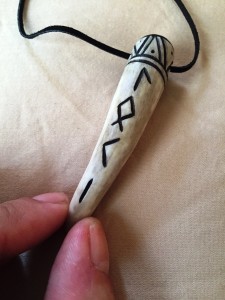 –thought I’m not exactly sure why.    Another gift, perhaps.

I’m kinda using this as a bookmark – as the leather thong that came attached to the antler works rather well for holding my place in the large poetry book that I’m reading right now – but when I’m not reading, He seems to like it if I keep it on His altar for now.

And most recently, there’s these Loki and Sleipnir mini-rosary beads from Beth Wodandis Designs:

They are lovely is all I can say.

I was struck by the coloring and quality of the labradorite.  I find them especially beautiful*

You see, I almost fell asleep while praying with them on the night that I received them.

The other darker beads are ‘dumortierite.’

I have read that dumortierite works well to increase one’s state of inner peace.

I am not kidding when I say that holding these has been immensely calming somehow, even though I had read in several other places that ‘dumortierite can be psychically energizing.’ Labradorite has a similar intensity of effect for me…but either way, I am not complaining.

Perhaps I have been more hyperactive than usual, therefore the intensity of these two stones has had a calming influence in response to my hyperactive energetic state.

*It would seem that Loki considered this mini-rosary as an appropriate gift for Him, as well, since every piece of labradorite I’ve ever had has eventually ended up on His altar somewhere.