Loki is a shaman just as Odin is, and Othala in His name represents His purview as a Master of Boundaries (as one must master all that defines a boundary in order to know how to push, much less break through a boundary.)

Luckily, one of the aspects of Othala is as a rune that represents a created boundary around the home, the community, and perhaps, the boundaries that define the individual  body.

Othala represents both what protects the tangible and intangible ‘wealth’/property of a space, as well as the intangible wealth of one’s heritage/knowledge, the boundaries of body and mind.

As a protective rune, Othala may signify the holy enclosure that echoes back to a holy role as featured in the Migration Age gold stamped bracteates, (1) such as this one: 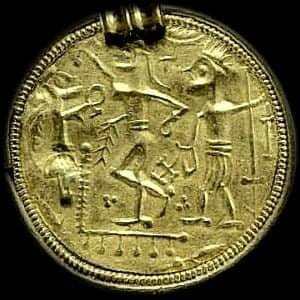 Therefore, the rune Othala can be invoked to create a sacred space/boundary for any individual or community work in much the same way one calls the quarters or casts a circle. The Norse specifically have rituals of ‘landtaking’ and frithstead making (see Thor’s Weoende Song).

Othala can be invoked to create sacred space for other specific forms of spiritual work, as follows:

-Othala is an appropriate rune to call upon for ancestral work as Othala is a rune that signifies spiritual heritage; thus Othala can be incorporated into any ritual that honors one’s ancestors (such as that which is done at Samhain or Yule).

Othala is a powerful rune that is said to hold the power of all other runes, along with representing both the physical and spiritual boundaries. Othala is a rune of powerful protective magic that can be invoked to mark space, hallow ground and hold energy within specific boundaries for divination and pathwalking.

(1) Stephan Grundy, PhD in Norse Studies, discusses in his book that “…there are three main surviving accounts of Baldur’s death. This concept… of Baldr as ‘sacred offering’ is the earliest account (c. 500 C.E) and is based upon the imagery that is stamped upon several Migration Age gold pendants called the “Three God Bracteates” which were worn for good luck… The three Gods are generally thought to be Loki, Odin, and Baldr. This interpretation, [according to Grundy] was first advanced by scholar Karl Hauck, as the bracteates depict three figures standing within an enclosure; one with a spear, one with a ring, and the other is winged and appears of mixed gender.” (Grundy, Stephan; God in Flames, God in Fetters: Loki’s Role in Northern Religion, pp. 9-15)