Here’s the end of November, and as you may know, most of the time that I tried to write about Odin, the posts…got eaten by the interwebz.

Except for maybe, two.

Was it inevitable?  Probably.

But, I have to write about this before the end of November; before I forget.

You know, I meant to write about this the other day (Monday, November 19th) because I went to a concert at the House of Blues with my oldest kid.

It was a metal show, by the way, because we share a love for metal music, my oldest son and I.

Lamb of God was the main show, along with Hatebreed and In Flames.  The opener was an excellent band named…Sylopsis <–(something like that.  I hate to think that I can’t remember the opener band’s name exactly, but they were not listed on the bill.  That is so sad, because they were quite good.)

Now, how does this relate to Odin?  Well, others may disagree, but I’ll tell you this.   Almost as soon as I started really researching the lore — and that would be about two or three years ago — I had a lot of metal on my iPod, Lamb of God included.

And I’ve no doubt that the gods can and do try to get through to us through such ordinary channels as the music that we listen to.

Or at least, in my case, I do know that the first time that I ever heard Lamb of God’s Descending, all I could think of was… Odin.

The drums, the wavering, dark thrumming of the opening notes that launches into the lyrics sung in low, almost guttural voice, conjuring up imagery in my mind of one being bound and hung by knowledge…someone seeking what has been lost…

The visual began as a dark and powerful one, a vision of a man who hung from a great height, his arms extended, hands scrabbling for something that lay broken in pieces below him, just out of his reach.

He struggles to remain conscious, to make sense of the dizzying vision of those pieces, and I see his fingers straining to gather them up… because to touch them, to hold them in his hands would be to begin to understand them…

And this song seemed to play over and over on my iPod, almost intrusively, throughout those days.

Descending became an almost unshakeable ear-worm for me.

Hearing that song could call up the wind and the darkest clouds to surround me and haunt me and my thoughts on the sunniest day.

It was the most unsettling song, always stopping me in my tracks, and yet I would never think to click the shuffle tab to get past it every time it came up.

But anyway, that song is by Lamb of God.  A groove/thrash/dark/new metal band from Richmond, VA.  They’ve been around since 1990 or so.

And, while Descending isn’t the only song that I like by LoG — there are several more that I had become familiar with before it — Descending has become the one song that I have always, undoubtly associated with He Who  hung from the tree for nine days; He Who sacrificed Himself to Himself for wisdom and won the runes.

But sadly, I knew that Lamb of God wasn’t going to play Descending on Monday night.  Even if I’d heard that they hardly ever play it, I secretly hoped that they would.

They played other songs, of course – Walk with me in Hell, Now You’ve Got Something to Die for, Omerta, Black Label — and the crowd was a rollicking, energetic mosh pit from the front of the stage all the way back to the stairs, and my oldest son, his friends, and I, were within that mass of rough, human energy and movement for a good long hour and a half.

But I had another surprise — and it was an interesting one I might add — in lieu of hearing Descending, I noticed their bassist, instead: 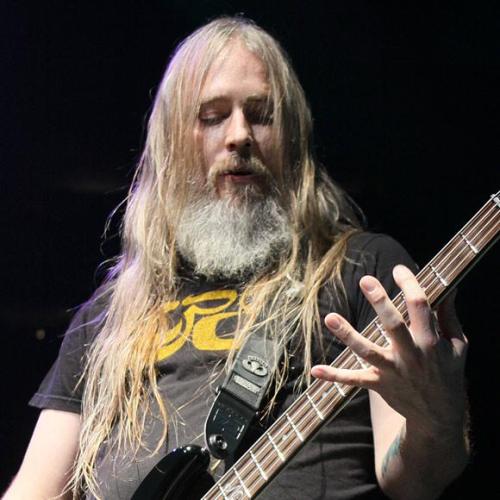 This is John Campbell, bassist, and one of the original members of Lamb of God.

Doesn’t he kind of remind you of Someone?

Or perhaps, the One whom Tolkien based Gandalf the Grey upon — which is actually the Old Man/ Wanderer himself.