We survived the first week of school pretty well, so I cannot say that things are going as badly as they were.

As a matter of fact, I’m almost afraid to admit that things might be slowly moving towards ‘going well’ these days.

So, with that said, we went out this weekend.

We went grocery shopping on Saturday morning, and got enough groceries to re-stock the pantry.

We even remembered to get the supplies to square away the pool so that we could actually enjoy our pool more often.

And swim in it we did.

We spent the bulk of  early daytime Saturday skimming, cleaning, and chlorinating the pool…followed by assembling pool floats so that we could spend the rest of the daylight enjoying the heat of the day in the water.

By the time that we were ready to be done with the pool for the day, it was time to settle in to watch the much anticipated new episode of Doctor Who, followed by the pilot episode of that new BBC series, Intruders.

We ordered out for Chinese, so I wouldn’t have to worry about cooking.

But then,  I realized that I had a produce drawer full of the best pie apples, so I ended up baking an apple pie after dinner, while we watched Intruders.

Intruders gave me something weird to think about in the first ten minutes, as there was that (heavily promoted) scene with that mysterious night visitor holding one of those yellow 45 rpm adapters… and as it turns out, that scene eerily played out so very much fucking closer to a very strange childhood memory of mine than I had previously expected…. that I very nearly had a full-on panic attack upon watching that scene.

NOW, while I can’t possibly guess at who those mysterious strangers will turn out to be in the series,  there is a part of my psyche that was and still is both intrigued and terrified by the possibilities.

What if they turn out to be….?

But I am telling myself that if they do…I’ll just take it as yet another instance of Sneaky Ton of Bricks, simply on par with an extreme What is My Life Even Moment.

Perhaps, if things get really intense, my experience may reach levels at the Ratio of Several WTFs Per Minute.

Today, we went to the Farmer’s Market, and I got my opportunity to pick up some locally grown cucumbers, tomatoes, and green peppers.

As well, I picked up 3 lbs of organic honey.

Do you know what time it is?

Why it’s mead-making time, of course ❤

(Though I still need to get some powdered milk if I’m ever going to make that honey candy that I have been meaning to make, as well.)

And then…I was lucky to find a great deal on a new firepit, and I’m no idiot, so I brought home that business.

But I am going to build a stone encasement around it, making it a more permanent structure in my yard, like this: 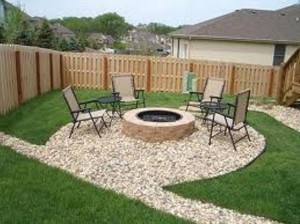 Of course, this means that I will likely be recycling the broken clay chiminea:

that I have been using for all my firepit ritual needs for the last several years.

Unfortunately, ‘Dick’ was gifted to me by my oldest kid five years ago, and as much as ‘Dick’ received a lot of use – when home, I wrote a letter to burn as an offering at least every other week or so — ‘Dick’ has always seemed to be a haven for spiders.

Yes, even despite the heat and you know, flames(!)… these fearless  spiders…still live there, and I am more than content to let them continue to do so.

I mean, these spiders risk being barbecued on a fairly regular basis, so I figure that they must be some pretty bad-ass spiders.

That is why it is that I think it best to leave the bad-ass fire spiders alone and create a nice fire-pit well away from them, to keep everyone safe and happy.

(And besides, Someone seems to love the idea of a new fire-pit.

How about FIRE NAO?  I would LOVE FIRE NAO.)

Speaking of which, my Much Beloved….