In what has become sort of a tradition for this blog during the month of July, today’s post will be a Loki artwork post.

When I first saw this, I immediately thought of Loki – and that is most likely because its subject does closely resemble how I’ve seen Loki a few times in the past.

As well, I have been known to refer to Himself as Mr. L — so you can imagine my surprise when I read Toradh’s description of this piece to discover that this was not intended to depict Loki at all, but rather a progressive metal/rock musician named Arjen Anthony Lucassen – and Toradh is a fan of his music.

So the fact that one of the main reasons that I was drawn to this piece was simply because of the ‘Mr. L’ title does strike me as an interesting coincidence 🙂

Meanwhile, this is actually how Toradh depicts Loki: 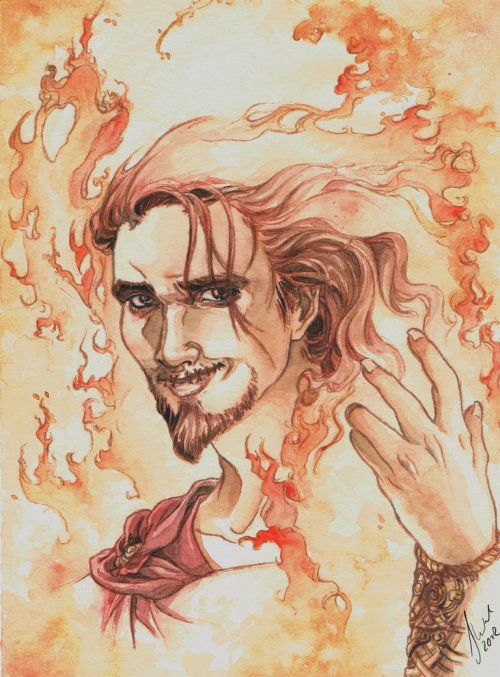 (See?  Not even remotely similar…but nonetheless, this is another piece of artwork that I love from Toradh as well, titled All the World Ablaze.)

Here is another piece from DeviantArt 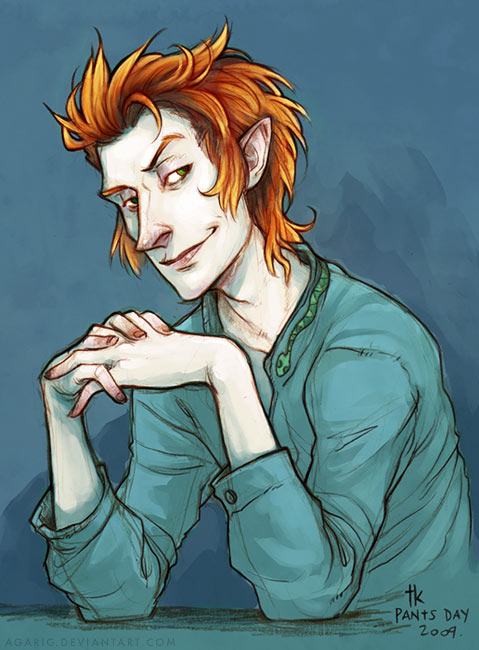 According to the artist, tkpants, this piece — (oddly) titled  Pants ’09 —  *is intended to be Loki*

What I like most about this artwork is how the artist has conveyed that sly, side-long glance of His, the positioning of His hands, the tousled hair, and His sharp almost elven features.

(Whenever I doodle Loki’s face, the result is often inspired by this artwork particularly because this was likely one of the first images that I added to my DeviantArt folder of Loki art, and I am just as delighted and awed by its simplicity as I was three years ago when I joined DA.)

Speaking of inspirations, here is another piece of Loki artwork that I fell in love with back when I first went searching for more modern artistic renditions of Loki: 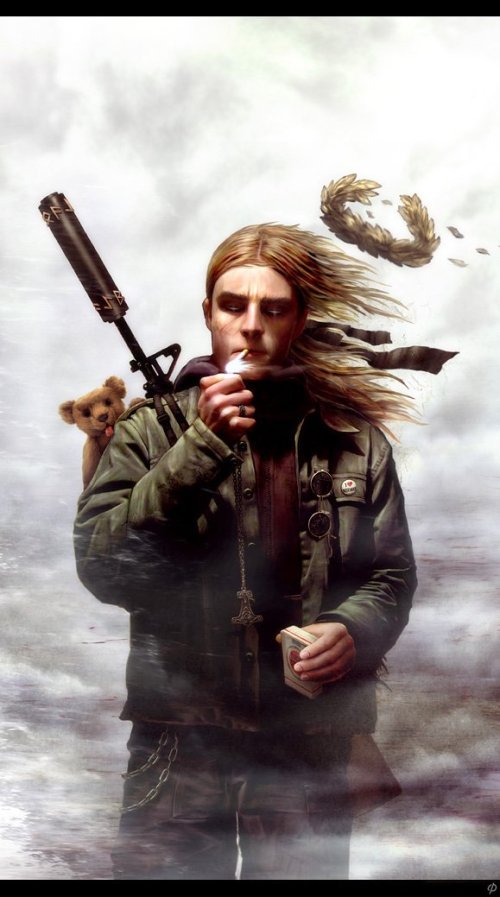 This is Loki’s Way by Piotr Cieslinski.

This!  Now this piece is so full of delightful details that I just can’t even…

I love that Loki is lighting a Lucky Strike cigarette.

I love Loki is depicted sporting a Mjölnir pendant.

I love the fact that He is carrying a teddy bear in His backpack.

I love how the runes are embossed on the silencer of the rifle.

I think it’s a sweet touch that He has  ‘I ❤ Norway’ pin on His jacket, even though the artist is Polish.

This artwork was commissioned for the initial cover for the first novel in a series of novels titled Klamca Loki, by Jakub Cwiek about 5 years ago.

While the book was considered a rather disappointing read by many reviewers, if one does a Google image search of Klamca Loki, one cannot help but notice that there is an amazingly wide variety of  Loki artwork inspired by this particular piece of Cieslinski’s, with Loki imagined as some sort of badass assassin with gorgeous rockstar hair dressed in black leather, motorcycle boots, and carrying lots of high-powered weaponry.

In that, much like Marvel’s Loki, I think this piece was the inspiration for a lot of the ‘Loki in black leather’ imagery that one can find on the Internet today.

And to be honest, much like Marvel!Loki, I don’t think that Loki minds at all that so many have become inspired to envision Him in that way either 😉