Spread the word, they said.

Well, some folks are.

The other day, I was thinking about this duty to evangelize that a lot of Christians have got going….and this default assumption that their evangelical Christian behavior is welcome anywhere that they are.

And it got me to thinking about my own religious beliefs and how I am sometimes reluctant to ‘come out of the closet’ as it were, because I personally live in a community dominated by Christians – namely Baptists and Jehovah Witnesses.

I’ve always chalked it up to the fact that I am living in that state in the South which is not the South but still has a lot of Southern conservative Christian attitudes, namely Florida.

(But even so, I will admit that even before I was publicly identifying myself as Norse non-reconstructionist polytheist, or as  a Celtic-flavored Pagan, I still grew up surrounded by people who often made the assumption that I must believe in a God and of course, that God had to be the Abrahamic God that they and their parents believed in — despite the fact that my parents styled themselves as agnostics — because I grew up celebrating Christmas and Easter.)

So, in that sense, I hardly think that I am the first person to point out that when you tell many people that you’re spiritual, they assume by default that you must be some form of Christian.

But aside of all that, I’m getting pretty cranky about some of the people in my neighborhood.

Mostly because there is a woman in my neighborhood who keeps tacking these little cardboard signs everywhere: 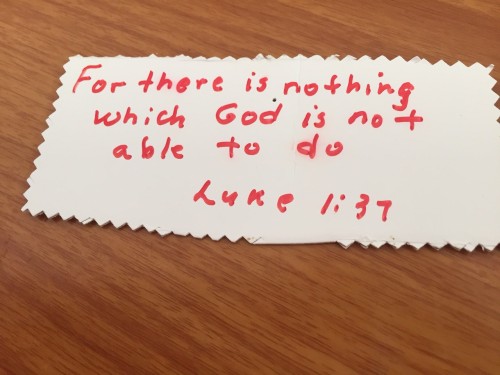 …and I mean everywhere.

Walking my dog the day before yesterday, I found at least a half dozen of them during the first 1/2 mile of my walk.  Two of them were taped above the walk signal button.  Three were tacked and/or stapled into tree trunks that were at least 100 yards from the road-edge.  And one – the above one – had been affixed to an electrical pole that held a public cable line repeater.

Walking today, there were at least eight more tacked, taped or stapled unto various things, often at eye-level.

One little sign had been twist-tied into the branches of a decorative hedge.

And it got me to thinking that someone was going quite out of their way to spread these blurbs of God.

I suspect that this is why small towns often put up those ‘Post No Bills‘ signs in downtown areas.

But no one seems to care — except for maybe me – because I watched several workers for the home association (whose job seems to be come out every other Thursday or so to clean up the litter along the sidewalks, and remove other things that don’t belong like the handmade cardboard signs of past garage sales and whatnot) – and I watched each of them stop as if to read these little signs, and then each walked away without removing it.

So, since the homeowner’s association seems to approve of these little signs – I mean, their job is to remove things like that all under the auspices of removing ‘litter’  and I distinctly witnessed each of them leaving these signs alone- I decided that I would turn each of these signs over and write my only little spiritual blurbs on them.

So far, I’ve re-purposed two with stanzas from the Hávamál, one with a short passage from the Vedas, two with verses from Thelema doctrine that came through the Ape of Thoth randomizer, and one with a portion of the Homeric hymn 26 to Dionysus.

Now let’s see if those signs stay up.

7 Comments to “Spread the word, they said.”