Month for Loki, Second: Why July?

The practice of dedicating the month of July to honoring Loki likely began during the summer of 2012 with this particular blogging project started by Galina Krasskova. It was during that summer of 2012 that many Pagan communities on the Internet saw an influx of new members (quite possibly due to the popularity of movies like Thor).

As well, it may have been in response to this steady influx of Lokeans that Heathen groups such as the Troth heatedly debated (though eventually decided to uphold) their ban on Loki during sumbel that summer.

Interestingly enough, perhaps the month of July–quite possibly the first community-wide attempt to celebrate Loki for 30 days – had been chosen for the specific reason that the heliacal rising of Sirius occurs in late July/early August.

But what does the heliacal rising of Sirius have to do with Loki? 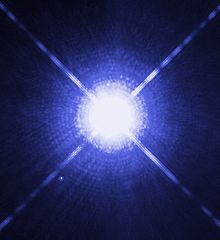 (The image of Sirius A and Sirius B taken by the Hubble Space Telescope. The white dwarf (Sirius B) can be seen to the lower left)

In some Scandinavian countries, Sirius is sometimes referred to as Lokabrenna (Loki’s Brand or Loki’s Torch.)

Sirius is so bright that it can even be observed with the naked eye, provided that the sky is clear, the observer is at a high altitude, or the Sun is at the horizon in the eastern sky, especially as Sirius appears during the late summer months in the Northern Hemisphere.

The appearance of Sirius in the sky was seen as of immense importance in ancient times; several other cultures worshiped and offered sacrifices as the rise of Sirius signaled good fortune. (Coins retrieved from 3rd century BCE were embossed with pictures of dogs or stars emitting rays, which may signify the importance of Sirius.)

Another common name for Sirius is the ‘Dog Star’ – which coincides with arrival of the oppressive heat – hence the reason why late summer (July 3rd-August 11th) is commonly referred to as the ‘dog days.’

Being the brightest star in the sky, Lokabrenna may have also been used as a navigational tool by sailors, such as the Vikings. Interestingly enough, Arab traveler Ibn Fadlan -who wrote the Risala around 921 A.D., regarding his impressions of the Varangians (Vikings) on the Volga trade route – dedicated the largest portion of his account to describing (and opining upon) the daily practices and beliefs of these traders.   Thus, Fadlan may have been the first to include reference to Sirius’ importance to the Vikings as a navigational guide in the eastern skies, among other things.

So, that being said, while there may not be any historical basis to celebrating July for Loki (as well as the fact that blogging for Loki is a relatively recent phenomenon) I see nothing wrong with dedicating myself to writing about Him for the next 30 days…do you?

2 Comments to “Month for Loki, Second: Why July?”