Two weeks ago, an out of state friend of mine went to visit her relatives back home.

She, her boyfriend and her kids took a six-day road-trip to Tennessee.

While there, she and her boyfriend decided to get married, so they did.

While their spontaneous barbecue/weekend get together wedding seemed to take all their friends and relatives by surprise, their day turned out to be exactly the sort of beautiful celebration that they’d been planning to have.

But it wasn’t so much of a surprise to me as she had told me of her plan to surprise everyone while she was on the road a day or two before.

She talked of how she wished that I could have been there on Thursday for their wedding on Saturday – which made attending a bit difficult if not impossible.

But I would have attended if I could have.

Though on that Friday night, I had a dream.

I had a dream that I attended their wedding…

And Loki was there, too.

Upon waking up, an image seemed stuck in my head 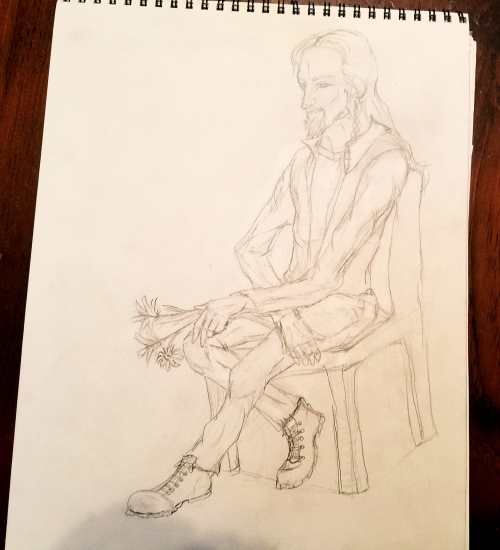 …of Him sitting in a chair, off to the side watching the festivities.

Some of the few details that struck me as unusual were that He was fully dressed *and* wearing boots, as well as He was holding a handful of black-eyed Susans.

On Sunday, my friend shared her wedding pictures on her Facebook feed.

And I was surprised to notice that both her bouquet and the flowers on the guest tables both featured black-eyed Susans.

I told her about my dream…and resolved to draw her a picture of Loki at the wedding.