Find out some of Loki’s kennings, or other names, and what they mean. Which one(s) resonate with you the most?

Since many of Loki’s kennings resonate with me, it was difficult to choose one that resonated with me the most…but I think that there is one in particular that actually took me by surprise, and so, I am going to write about Gammleid today:

In July 2014, I took a course from Cherry Hill Seminary. This course dealt exclusively with studying the role of shapeshifting in the lore of several cultures. Though the course mainly focused on shapeshifting lore in South and Central America, the final project was to present how shapeshifting might feature in our personal spiritual practices.

Thus, I performed a personal meditation ritual in mid-July 2014 that was meant to introduce me to my ‘spirit animal guide.’

And much to my surprise, Loki showed up and suggested the vulture as the ‘spirit animal guide’ in that first meditation, and again, vultures featured in a few more interactions thereafter.

I was baffled, but like a good student, I resolved to research the connections between Loki and vultures.

Soon enough, I came upon a list of Loki’s kennings, and even more surprisingly, the kenning, ‘vulture’s path’ came up.

But oddly enough, I wasn’t able to find much scholarship that even speculated as to what this kenning might represent, until I found this:

-from ÞÓRSDRÁPA  Stanza 2, verses 1-4, The Codex Regius from this site

Meanwhile, I’d begun amassing quite a collection of vulture feathers: 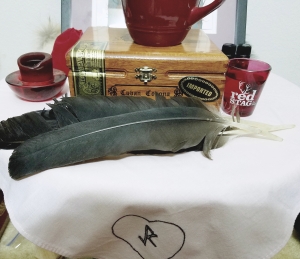 And then, shortly thereafter, I read this in Dagulf Loptson’s ePub, Playing with Fire: An Exploration of Loki Laufeyjarson :

“The name “vulture’s path” is possibly a kenning for air, which connects with another of Loki’s kennings, Loptr. However, we are left with no explanation as to why the vulture, as opposed to any other kind of aerial creature, is used to illustrate flight through the air, especially since Loki typically takes the form of a fly or a falcon. I personally feel that vulture might be associated with Loki for the following reasons.
Both vultures and ravens are well known scavengers, making them both symbols for death. It isn’t unreasonable to assume that our ancestors often saw vultures and ravens together while the birds were eating bodily remains. As Odinn is always with ravens, perhaps his blood-brother and traveling companion Loki was associated with vultures.

The vulture could also be linked to Loki…in his aspect as a god of death and cremation, as a traveler to the underworld, or as a dissolver of illusions.” *

**Cue the sound of my mind being blown**

But what did working with Vulture teach me?

On the surface, a lot of folks (including myself, at one time) see vultures as birds of the dead, and they are.  But, much like crows – another creature I associate with Loki – Vulture’s work is one of transformation, as vultures, like crows, are carrion eaters.  Ancient cultures, such as the Greeks, Assyrians and Egyptians saw the vulture as a purifying, transforming force — a creature who purifies the landscape and environment through its consumption of the dead and decaying remains.  Symbolically, carrion eaters make use what others have abandoned or cannot use, and through that process, the carrion eater ensures the continued health and life of other living things. Vulture symbolizes that process – of turning poison into medicine, death into life – and therefore, the vulture represents transformation and regeneration.  Connected to that transformative aspect, vultures can teach us that our difficulties and struggles are temporary, and that what seems like an end (death) or a loss (sacrifice) is simply a phase in the process of growth and change. 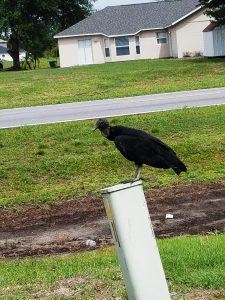 And of course, Hail Vulture, Resourceful One, Patient Teacher, and Master of the Skies ❤